Before I begin this article I would like to start by telling a bit about myself. I am an African-American young adult woman with Caribbean roots. This play that I will be reviewing focuses on topics of race, sexuality, and age in a market where not fitting a particular role is a detriment to your livelihood. I wish to handle the topics presented with the seriousness with which it was presented to me. To do so I feel it is important for readers to know through what lens I saw the play. 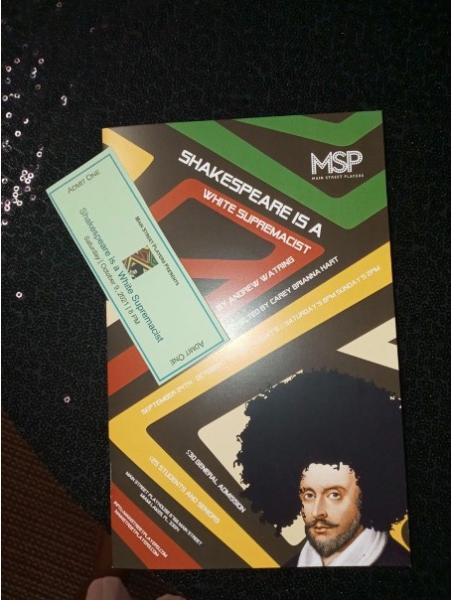 Pictured: Ticket and Program for Shakespeare is a White Supremacist

Pictured: Front of Main Street Playhouse with Shakespeare is a White Supremacist poster

Shakespeare is a White Supremacist follows the aptly named Director a young man out to bring diversity and inclusion to his traditionally all-white-cast theater starting with a Shakespeare play with a diversified cast. Yet with challenges between cast members and between cast members and the director, it is shaping up to be a difficult venture. Emotions and conflict run high in this moving tale of modern racism, patriarchal hierarchy, and identity politics.

Characters and their Struggles

Juliet is a mature Afro-Latina woman who struggled to find a director able to see the Cleopatra in her. Directors wanted a white-skinned youthful Cleopatra and that is what they got. She struggles in a world where she does not fit into the Hispanic stereotype directors already have in mind and where she must over exaggerate her blackness to be recognizable as what African-American is to a white director. Years went by and she remained passed over and pushed to the background as an aging dark-skinned actress until being cast by Director but even then he sees her as all the directors do an old lady to put in the background.

Titania is a fiery, no-nonsense character who speaks the blunt truth no matter who it may hurt. She is the character that progresses the plot the most by actively challenging their beliefs and stances. Titania knows that Director needs her face, a minority face, to bring this diversity project to fruition. She realizes the odds are stacked against her because she is an African-American woman and chooses to face them head-on. My favorite moment from her is when she lines up the character in terms of how white-passing they are and asks the director if this is how he sees them as this is how a primarily white audience will view them. Although Titania is aggressive in her demeanor I appreciate that she can admit when in her fight for justice she shows her prejudice over who she views as enough of a minority to speak on minority issues. Titania is a refreshing mouthpiece in a world where people oftentimes like to tiptoe around issues of race and sexuality while somehow hoping to be able to fix them while doing so.

Viola is a white-passing Hispanic woman who is in a relationship with the director. She struggles with being used as a diversity prop by directors whenever her last name is listed on programs. When interacting with other white people she is perceived as white and as such has to listen to their grievances while actually belonging to a minority group. Her relationship with the director negatively affects the relationship she has with her castmates. They feel she got in because of her body and question her actual talent. When speaking about her past relationships Viola exposes how she feels that she often has to use her body to secure roles and this is not the first time she has done it. Her relationship with the Director becomes fraught as he continues to blur the lines between their personal and professional relationship. 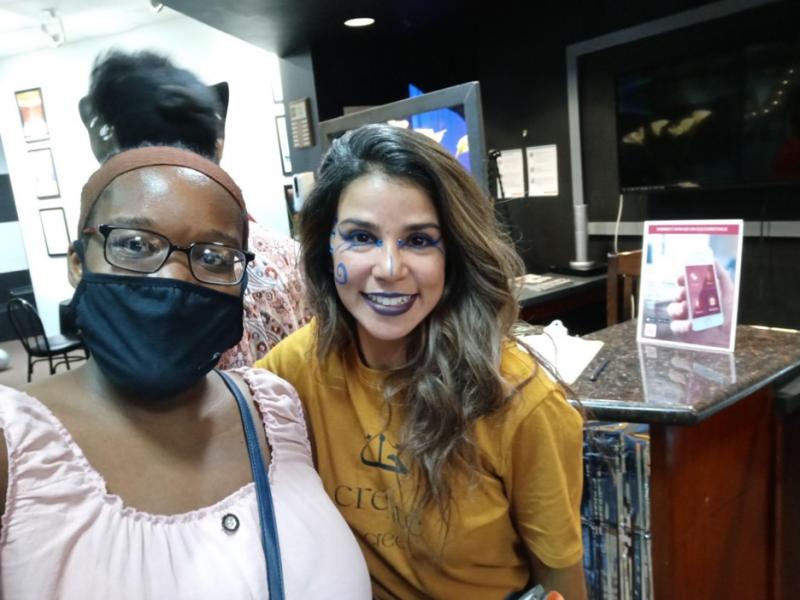 Pictured: Me with Vanessa Tamayo (Ophelia)

Ophelia is a Hispanic immigrant who struggled with a sudden shift in identity when she moved to the United States. In her home country, she was considered white but is now a minority in the U.S. where she is looked down on for her accent. Ophelia tries her hardest to learn English but it is difficult when her voice, if not her appearance, clearly marks her as a foreigner. Even after coming to terms with her identity she still faces others dismissing her as a minority because she is solely Hispanic and perceived as not enough of a minority to speak out.

Macbeth is an African-American man struggling to distance himself from the only Shakespearean character directors see in him which is Othello. He has a close relationship with Director and believes in his vision of a more diverse theatre but slowly begins to lose faith as it seems Director is just as determined on turning him into the animalistic black man he tries so hard not to be. Shocked at the change in the friend he put his trust in, Macbeth is left to wonder in silence at his judgment. His mental state is fraught as he struggles with trying to be seen as unthreatening but knowing all people want to see in him is a minstrel clown or a beast.

Actress is one of the few fully white characters in the play. She feels like an outsider among the cast and finds comfort in the white-passing Viola who she calls “one of us”. While she is pretty mild-mannered for most of the play her biggest moment was her admission that she does not know how to properly support her minority counterparts. Actress struggles with what she should and should not assume when it comes to interacting with minorities and constantly says sorry but feels conflicted with how she feels she should get grief for knowing someone’s racial identity. Instead of taking a stand with minorities, she feels it is just better for her to remain silent and step aside so that hopefully their voices can be heard more. While her allyship seems sincere it is misguided because she does not work together with POC to use her voice to support their causes and her silence can be seen as compliance with the status quo.

Director is a white man and the driving force of the play. He brings the cast of these characters into one place to prepare for the series of diversity-driven plays he plans to put on. He seems bright-eyed, progressive, and optimistic but proves to be more of a villain as the play progresses. His promise to listen to his actor soon becomes little more than a far-off dream. Director’s actions seem ignorant at first but slowly grow to be malicious micro-aggressive and sexist actions the cast has to endure. His actions are finally confronted at the end of the play when what he says instead becomes what the actors hear. The dialogue in this section is sexist and racist in a way most people do not hear outwardly anymore because these thoughts are hidden behind sugar-coated words with enough ambiguity for excuses. It is only then that Director realizes the change in the theatre must start with him or he is not better than the theatre committee who want a palatable all-white cast for their mostly white audiences.

As amazing as this play was is there was a minority view missing that is even more stark with the recent #StopAsianHate movement that came out of the pandemic. Among the Shakespeare cast, there lacked any Asian representation to speak on the trials and tribulations of being what people often refer to as the “model minority”. I feel this would have taken the play one step further as the stories of Asian-Americans or Asian immigrants, especially those from South-East Asia, are consistently missing in these narratives on racism. While I do recognize that even then there are a plethora of other minorities, like Native-Americans and individuals from the Middle East, who would still be left out. I just felt that with the recent increase in animosity towards the Asian population in America it would have been nice to see their issues with racism and media representation explored in this play.

Shakespeare is a White Supremacist is a raw and gripping modern take on racial exploration that I wish more formats copied. It made me uncomfortable as a black woman seeing my everyday struggles being confirmed and portrayed live. I was forced to come face to face with inequalities I am made to face daily because of reasons beyond my control. Every person no matter their race and gender can take away important lessons from this play and may even be forced to reevaluate their values and actions. This play is well worth a watch and I hope as many people as possible have the chance to experience it.

Remember to check the Culture Shock Miami website for $5 tickets for ages 13-22 for cultural activities across Miami-Dade County!