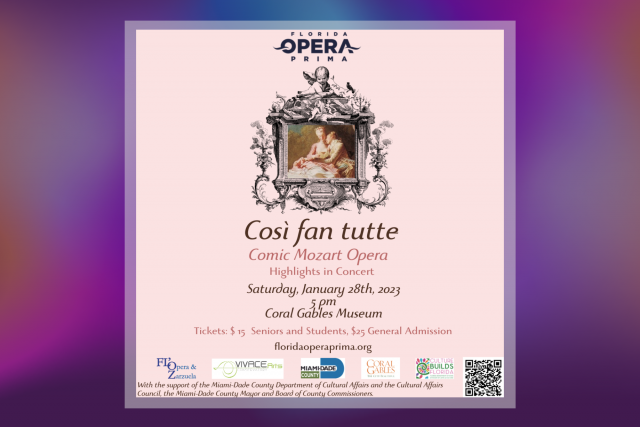 A﻿s one of Mozart's most well-known opera masterpiece, it is a must watch favorite of the classical music repertoire. Florida Opera Prima has selected Cosi fan tutte highlights to be performed in a concert format to further it's mission as a nonprofit organization for the Performing Arts in Florida. Featuring international artists: Zaylí Escalona, Kiley Hernández, Silvia Ludueña, Lucia Panizza, Herman D´íaz, Carlos Jimeno

Deeply convinced of women’s infidelity, the cynical Don Alfonso provokes his young friends Ferrando and Guglielmo by impugning the constancy of their fiancées, sisters Dorabella and Fiordiligi. To prove his assertion, Alfonso proposes the following plan to them: that they tell their fiancées they are leaving for war, and then return dressed as Albanian soldiers, ready to do anything to seduce the lonely fiancées. With their “real” lovers gone, Fiordiligi and Dorabella appear outraged when their servant Despina (Don Alfonso’s accomplice) introduces into their home the two Albanians, who quickly prove very enterprising. The two sisters at first reject them virtuously but soon allow themselves to be seduced by these new suitors who, under a false identity, gradually become disillusioned as they see their mistresses betraying them. “They all do that!” (“Così fan tutte”) Don Alfonso concludes, delighted to have proved his theory. When the deception is revealed, the two couples reunite despite it all, with no great illusion about their happiness.

Regular priced tickets for all other ages available at https://www.eventbrite.com/e/493936837377