A Kids Play About Racism, a theatrical adaptation of Jelani Memory's book- Broadway On Demand 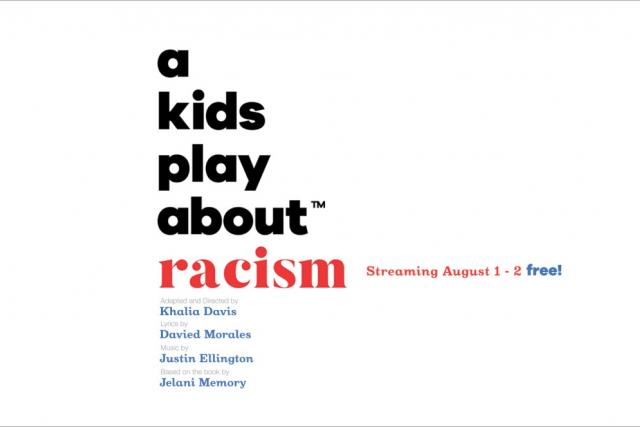 A Kids Play About Racism, a theatrical adaptation of Jelani Memory's book- Broadway On Demand

Lead producers Bay Area Children's Theatre, Seattle Children's Theatre and Alliance Theatre in Atlanta, in a collaboration with 37 other theatres that serve young audiences across the United States, will present A Kids Play About Racism, a theatrical adaptation of Jelani Memory's A Kids Book About Racism, August 1 and 2 on the streaming platform Broadway On Demand.

Families can watch the play at their convenience anytime on August 1 and 2, along with accompanying interviews and educational videos, by creating a free account at https://get.broadwayondemand.com/

A Kids Play About Racism uses theatre to offer young children and families a way to engage in meaningful conversation about what racism is, how to know it when you see and experience it, and what you can do about it.

The new work, which is recommended for ages 5 and up, is adapted and directed by award-winning director and Theatre for Young Audiences (TYA) artist Khalia Davis and will be brought to life by an all Black and BIPOC cast and creative team from across the United States.

"I jumped at the opportunity to adapt Jelani Memory's book into a theatrical piece for young audiences at this time simply because it meant we were recognizing the importance of including children in what can be difficult conversations," Davis said. "This show embraces the full spectrum of emotional response children may have as they navigate comprehending racism and how it may affect them."

In conjunction with the production, educational materials developed by Seattle Children's Theatre in collaboration with the Northwest African American Museum will extend the experience and enhance age-appropriate engagement.

"When I wrote A Kids Book About Racism, I wrote it for my own kids," Memory said. "I never could have imagined it would have spread so far and wide to thousands of kids all over the world--or turned into a nationwide theatrical event. I am thrilled to see what Khalia Davis and these other amazing artists create."

A Kids Book About Racism is part of Memory's children's book publishing company A Kids Book About, which offers titles on a range of big topics to explore, including feminism, belonging, gratitude, cancer, and many more.