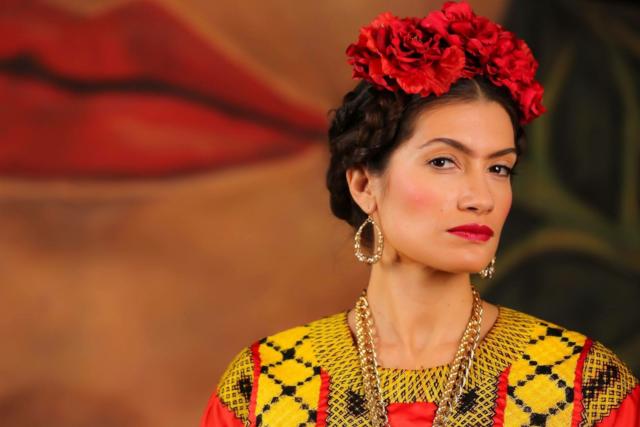 Robert Xavier Rodríguez’s colorful score is a perfect match for the passionate art of the legendary painter Frida Kahlo. Although the artist was wracked by agonizing physical pain and caught up in a stormy marriage to Diego Rivera, the flame that fueled Kahlo’s art just kept burning and never turned to ash. She created fifty-five self-portraits. But no portrait of her is quite as revealing as the one in Rodríguez’s opera.

ACT I
Scene 1: Mexico City, 1923.
An unruly male gang called Cachuchas, led by the young Frida Kahlo and her boyfriend Alejandro, accosts a group of schoolgirls. Frida and her sister Cristina watch a mother whose child has died beg a vendor for a mat to bury her son. Moved by the poverty they see, Frida and Cristina witness a celebration of the Zapatista Army of National Liberation and take heart in the promise of the revolution.
Scene 2: Frida’s room in Coyoacan, 1925.
Experiencing her first menstruation, Frida tells Cristina of her expectations of life upon coming of age.
Scene 3: A street and Frida’s room, 1925.
Frida and Alejandro board a bus, which is then struck by a tram. Frida is severely injured but she resolves to live and begin her life as a painter.
Scene 4: Mexico City, 1928–29.
As Diego Rivera paints a mural at the Preparatory School, his wife Lupe attempts to grab his attention. Frida pays Diego a visit and introduces herself to him. Lupe becomes jealous of the young visitor. Frida shows Diego her portfolio and he encourages her to pursue a career as an artist and begins to court her. Diego asks Frida’s father for her hand in marriage. At the wedding ceremony, Lupe makes a dramatic and futile attempt to win Diego back.
Scene 5: Diego’s studio, 1930–31.
Frida critiques Diego’s work as he paints a portrait of Emiliano Zapata. They are interrupted by revolutionary communists who denounce Diego. Frida and Diego resolve to try their luck in the United States of America.
Scene 6: New York City, 1931–33.
Frida and Diego attend a dinner party hosted bythe Fords and the Rockefellers. Diego enjoys the adulation while Frida ridicules the rich. Rockefeller commissions a mural from Diego, and Frida gives a spirited interview to the press.
Scene 7: New York City, 1933–34.
Diego works on his commission, “Man at the Crossroads.” Rockefeller berates Diego for displaying his communist sympathies by portraying Vladimir Lenin in the painting. The mural is destroyed and Frida miscarries. She persuades Diego to return to Mexico.

ACT II
Scene 1: San Ángel, Mexico, 1934–35.
Back in Mexico , Frida and Diego move to adjacent blue and pink homes. She is overjoyed at being back in their homeland, while he is miserable. Frida chooses to ignore the parade of lovers that go through Diego’s house, but she is horrified to discover her sister Cristina among them.
Scene 2: San Ángel, Mexico, 1937.
Leon Trotsky and his wife Natalia visit the Riveras in Mexico. Diego and Natalia confront Frida and Trotsky over their undeniable mutual affection. Cristina expresses regret for betraying Frida. Diego and Frida come to the realizations that their differences cannot be reconciled.
Scene 3.
Frida retreats to the seclusion of her home and takes comfort in male and female lovers.
Scene 4: New York Art Gallery, 1938.
Diego resolves to promote Frida’s work in the United States and meets American actor Edward G. Robinson, who purchases several of Frida’s paintings. Diego urges Frida to pursue her own career without him. Frida takes photographer Nicholas Murray as her lover. Frida and Diego decide to divorce.
Scene 5: Frida’s imagination.
Haunted by pain, Frida continues to paint while imagery from her seminal works “The Broken Column,” “The Wounded Deer,” and “Self Portrait with Monkeys” comes alive in her mind.
Scene 6: Hospital room, last day of Frida’s life, 1954.
In a delirium, Frida relives episodes of her life, including the assassination of Trotsky, of which she and Diego were accused. Diego returns and sings to entertain Frida, finishing with a proposal to marry her again. Frida agrees and a joyful celebration ensues as she departs life with a cry of “Viva la vida, alegría, y Diego” (“Long live life, joy, and Diego”).
–MICHIGAN OPERA THEATRE