Discover Miami Through Music at the Miami Woman's Club: The Music of Mana-Zucca Presented by Orchestra Miami 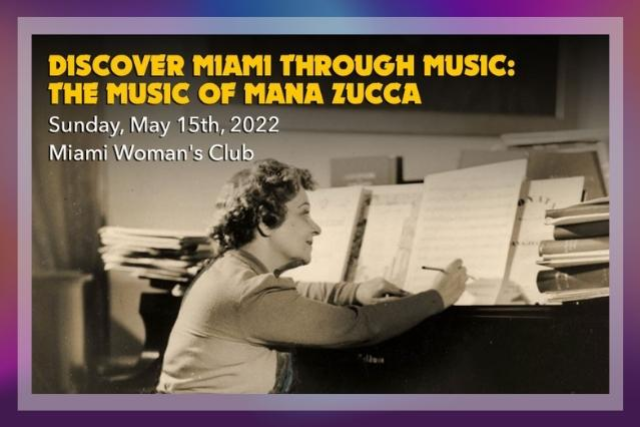 Discover Miami Through Music at the Miami Woman's Club: The Music of Mana-Zucca Presented by Orchestra Miami

Miami Woman's Club
Orchestra Miami celebrates the legacy of Mana-Zucca, a legend in Miami’s music circles and a pioneering composer at the Miami Woman's Club. Prior to moving to Miami, Mana-Zucca was a celebrated concert pianist and singer who performed leading roles in musical comedies. After her move to Miami, she became a prolific composer, composing over 400 works, and holding weekly musicales in her home "Mazica Hall”. She was also the teacher of concert pianist and pioneer Ruth Greenfield, whom we will honor at the concert.

The Miami Woman’s Club was founded in 1900 as the "Married Ladies' Afternoon Club" just four years after Miami was incorporated. Their current newly renovated home was designed in 1925 by August Geiger, one of the most prominent American architects in South Florida at the time, and had its grand opening in 1926 as the Flagler Memorial Library and Women’s Club. The organization provided library services for the city and worked toward the establishment of a municipal library system. The building was added to the National Register of Historic Places in 1974.

The performers include Orchestra Miami principal Cellist Aaron Merritt, Principal 2nd Violinist Karen Lord-Powell and Orchestra Miami's Artistic Director Elaine Rinaldi on the piano. Tickets are priced at just $25 General Admission for Adults, $20 for Seniors over 65 and $5 for Students with ID. The Miami Woman's Club has valet parking only available for $20; metered street parking may be found along Bayshore Drive, or park in the Omni Garage on NE 15 Street. For more information, please visit www.OrchestraMiami.org or call (305) 274-2103.
Age Appropriateness 13 and up
Instagram @OrchMiami
Facebook facebook.com/orchestramiami
Twitter twitter.com/orchestramiami

Regular priced tickets for all other ages available at http://www.orchestramiami.org