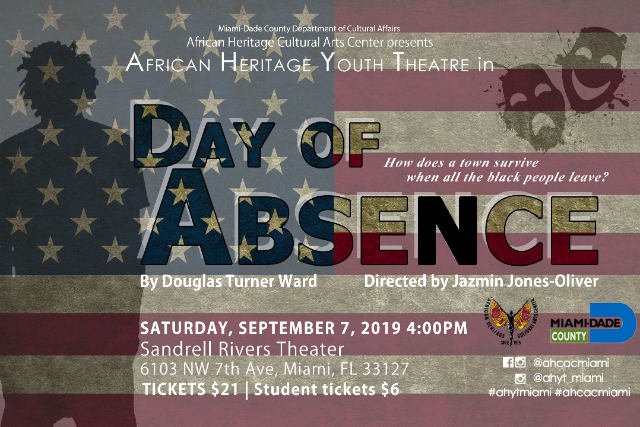 Sandrell Rivers Theater
The African Heritage Youth Theater (AHYT) is the in-house drama apprenticeship at the African Heritage Cultural Arts Center, under the direction of Jazmin Jones-Oliver. Comprised of 16 dynamic students, ranging from ages 9-17, AHYT strives to prepare young thespians for a professional career. This is the first full length play by AHYT in over 5 years.

A satirical fantasy about an imaginary Southern town where all the black people have suddenly disappeared. The only ones left are sick and lying in hospital beds, refusing to get well. Infants are crying because they are being tended to by strange parents. The Mayor pleads for the President, Governor, and the NAACP to send him "a jackpot of jigaboos." On a nationwide radio network he calls on the blacks, wherever they are, to come back. In the end the blacks begin to reappear, as mysteriously as they had vanished, and the white community, sobered by what has transpired, breathes a sigh of relief at the return of the rather uneasy status quo. What will happen next is left unsaid, but the suggestion is strong that things will never quite be the same again.
9/7/2019 4:00pm GET TICKETSGET INFOGET TICKETS