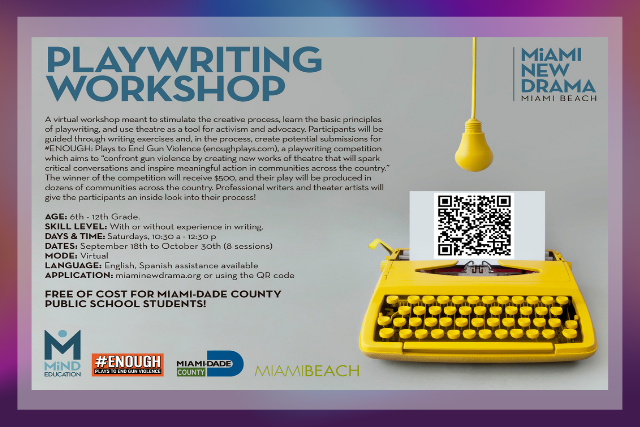 A virtual workshop meant to stimulate the creative process, learn the basic principles of playwriting, and use theatre as a tool for activism and advocacy.

Participants will be guided through writing exercises as they create potential submissions for #ENOUGH: Plays to End Gun Violence, a playwriting competition aiming to “confront gun violence by creating new works of theatre that will spark critical conversations and inspire meaningful action in communities across the country.” We will be bringing in professional writers and theater artists to give you all their amazing tips and tricks!

The workshop will be led by actress and playwright, Maria Corina Ramirez. Maria Corina has most recently written, directed and starred in her debut feature film, Bridges, which premiered at the 38th Miami International Film Festival and the 20th Los Angeles Latino International Film Festival to much acclaim. She is dedicated to creating work that amplifies and humanizes the real Miami, the Latin female experience and promotes real changes in matters of social justice.

This VIRTUAL workshop will be held every Saturday from 10:30 AM to 12:30 PM from September 18th-October 30th. Students will be assisted with submissions during the final workshop. There are a total of seven workshops, with a potential for one additional to be scheduled during the final week based on availability.

FREE OF COST FOR MIAMI-DADE COUNTY PUBLIC SCHOOL STUDENTS! Must be registered before receiving Zoom link.