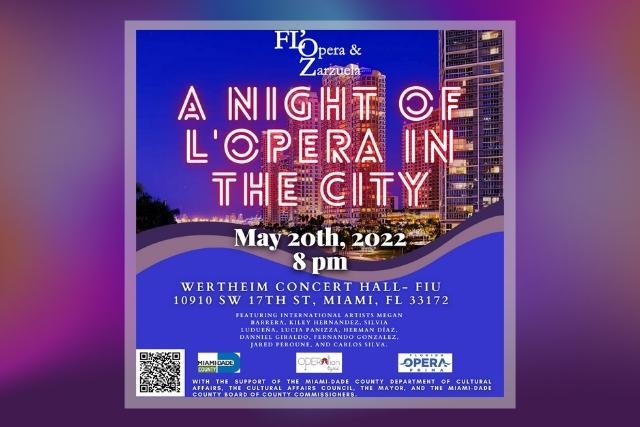 A Night of L'Opera in the City is an Opera Scenes Program featuring some of the best moments of the most well-known operas written by Mozart, Verdi, Puccini, Gounod, and Bizet. The scenes are staged in Miami, where a particular character links the different situations, and at the same time provides dramatical context. Featuring local and international artists:

Herman Diaz, Cuban-American Lyric tenor praised for his range and versatility, is a graduate from University of Florida via NWSA with a Bachelor’s degree in Vocal Performance. In Florida he has been engaged with companies such as Miami Lyric Opera, The Opera Atelier, Voices of Miami, La Zarzuela among others. Mr. Diaz is co-founder and Music Director of Florida L’Opera & Zarzuela.

Fernando González is a Lyric Baritone with an extensive music repertoire who has been seen working with companies such as Cuba National Opera; Florida Grand Opera, Vero Beach Opera and Palm Beach Opera. His rich repertoire includes Zarzuela and Spanish song as well as many famous opera scenes.Fernando is a member of the Gulfshore Tenors and The Latin Divos.

Kiley Hernandez graduated from the Instituto Superior de Arte in Havana, Cuba and has over 20 years of experience as an opera singer. Upon her arrival to Miami in 2007, Kiley Hernandez participated in multiple Zarzuelas and Operas. In 2013, she founded Florida Opera Prima (FOP) to create a space and opportunities for emerging artists to develop their talents. Danilo Dominguez joins FOP as artistic director and stage manager with over 30 years experience in the Opera and Theater here in Miami. Other participating singers and actors of the company are graduates of well-known schools of art with great participation in the Zarzuela and the Opera locally and internationally including Teatro Real de Madrid, Florida Grand Opera, Sociedad Pro Arte Grateli and others. Since its inception in 2013, FOP entertains, delights and educates the diverse audiences of Miami-Dade County with cultural experiences including presentations of Classical Music, Opera, and Zarzuela.

Lucia Panizza is a Uruguayan-American soprano. She graduated with her Bachelor of Music degree in vocal performance with the highest honors from the University of Florida/New World School of the Arts where she was a full scholarship recipient. In Uruguay, she graduated from Universidad de la República, and attended Escuela Nacional the Arte Lirico, SODRE, where she performed the role of Susana in the opera The Marriage of Figaro, as well as several concerts. She was awarded two full scholarships by the Uruguayan Association of Musicians (SUDEI). Thereafter, she was chosen to take part at a summer program at Teatro Colon (Buenos Aires, Argentina). In the United States she has engaged with several opera companies including, The Opera Atelier, Miami Lyric Opera, Miami Classical Music Festival, and La Zarzuela Inc. Mrs. Panizza is co-founder and Executive Director of Florida L’Opera & Zarzuela.

Jared Peroune, collaborative pianist, is a Doctor of Musical Arts student at the University of Miami. Quickly becoming an established collaborative musician, Jared has collaborated with a number of vocalists and instrumentalists throughout South Florida. He has been heard in concerts and recitals throughout Florida, Italy, Ireland and the United Kingdom, and in his hometown of Georgetown, Guyana. Broadening his abilities to other keyboard instruments. He is staff pianist-coach at Florida International University and piano faculty at Barry University in Miami Shores. He is also on the music staff of Florida Grand Opera as pianist-coach.

Carlos Silva was born in Valera, State of Trujillo, Venezuela. Studied Voice in Caracas at the Simón Bolívar Conservatory of Music. After finishing his studies in Caracas, Carlos moved to Austria to continue his education at the Vienna Conservatory of Music, where he studied from 1996 to 2000. He also studied voice under the supervision of Renate Weniger, in Vienna, during 2000 and 2001. His most recent engagements include Madama Butterfly in Teatro Phillips de la Luz in Madrid, Spain, a Zarzuela Anthology in Jerez de la Frontera, also in Spain, a recital with the Malaysian Philharmonic Orchestra in Kuala Lumpur and diverse concerts in Miami Dade Concert Auditorium, Miami Hispanic Cultural Center and Paseo de las Artes, in Miami. He has created some successful plays for the Miami Dade County Auditorium and Arca Images: “Un Viaje de Navidad”, “El Maestro de Música”, “Venezuela arte y parte”, “Zarzuela de dos orillas” and “el Maestro de Música”. Recently, he’s performed a Gala Concert with Miami Lyric Opera in Miami.

Age Appropriateness: All ages - family friendly event
For updated health and safety protocols, please check the venue's website before heading out to the show.

Regular priced tickets for all other ages available at https://www.eventbrite.com/e/a-night-of-lopera-in-the-city-tickets-275801147657