If You Call I'll Be Right With You, A New Musical Production by A.G. Presented by Bas Fisher Invitational 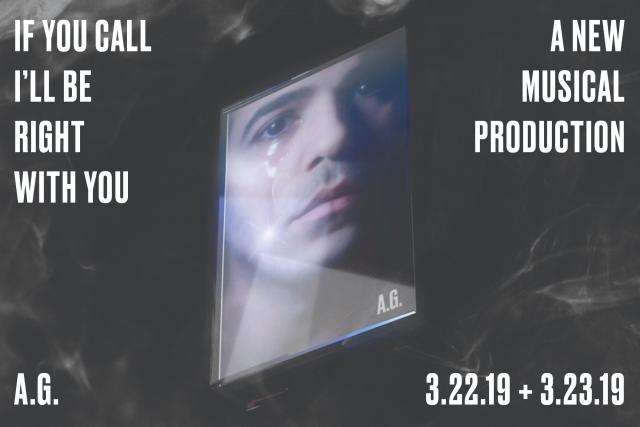 If You Call I'll Be Right With You, A New Musical Production by A.G. Presented by Bas Fisher Invitational

If you call I’ll be right with you, a new musical production by Miami-based artist A.G. will be held in the abandoned rotunda in Collins Park, Miami Beach, FL on the west-side corner of Collins Avenue & 22nd Street. The show will run twice each night on March 22nd and 23rd.

Each Performance is about 20 minutes long. Please arrive 15 minutes before the scheduled performance.

Inhabiting the raw cylindrical structure, A.G.’s new production will debut music, movement, video, and lighting as it takes cues from philosophical ideas of the “Other” and the cinematic trope of the telephone. A.G.’s transdisciplinary practice aims to utilize production, theatrical modalities, and entertainment as a realm of thought to elicit the notion that reality is a malleable material and that we are all uniquely capable agents of self-direction. If you call I’ll be right with you will be his first live show, considered a unique artwork in itself.

The abandoned and completely raw cylindrical rotunda will be produced into a theatrical space which will house the live cinematic experience. Described as "cosmic American music," Zeitgeist Machine, the new EP by A.G., produced by Dion Kerr, will provide the soundtrack for the show- illuminating a nuanced shell of the Other; a philosophical set of ideas in regards to that which is opposite of one’s Self. The pop-structured song list is inspired lyrically by the trope of the telephone, telecommunications, and implied communication- much like a medium conjures the spirits. The Other, which emerges as an invisible character through the actual production, illustrates a powerfully universal force which is in constant communication and operation- to be reached, impressed, rejected, feared and loved. The realization is that the Other has ultimately become a collective projection of the audience- participating in an active role.

As of now, a hotline is accessible from any telephone at 1(833) CALL-1-AG, which will premiere the title track as well as prompt a forum to leave a message. Additionally, a Playbill program will be available to all audience members- functioning simultaneously as a relevantly useful ephemera and a limited run publication.

Built in 1962 as part of the Miami Beach Public Library, the rotunda in Collins Park was conceived of by New York-based architect Herbert A. Mathes as an auxiliary pavilion for the library which would function as an auditorium intended to help cultivate literary culture in Miami Beach by hosting readings, lectures, and films. That era reflected the optimism of the early 1960’s in Miami Beach, with new construction, hotels, and celebrity guests such as Frank Sinatra and Jerry Lewis. Since the 1980’s, the rotunda has been left isolated and abandoned, only serving as an empty armature which supports the original exterior relief sculpture by Albert Vrana. Titled The Story of Man, the concrete abstracted design references the role of the written language in the development of our culture.