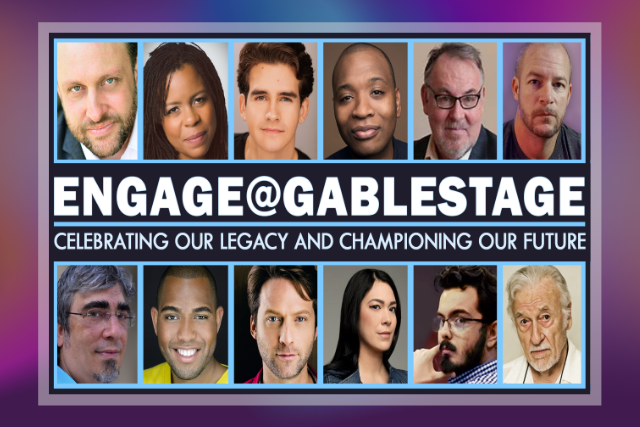 GableStage’s Board of Directors created ENGAGE@GableStage to replace the cancelled 2019-2020 season of live theater due to the COVID-19 shutdown. The purpose of the program is to empower artists to create short-form digital content, in any artistic discipline, that remains consistent with GableStage’s mission of producing work that confronts today’s issues and ideas with innovative productions that entertain, educate, and challenge diverse audiences.

ENGAGE@GableStage will be kicking off on July 31 at 7pm with an original photomontage by photographer George Schiavone set to a newly created musical score by Sound Designer Matt Corey, a retrospective and new perspective on the GableStage productions of the past two decades. This special project that was commissioned by GableStage for the programs’ launch will set the stage for this new season of weekly world premiere productions over the next two months. Grantee projects will receive digital world premieres every Friday thereafter at 7pm, from August 7 – September 25, exclusively on the GableStage website for free.

SIGHT AND SOUND
BY GEORGE SCHIAVONE & MATT COREY
PREMIERES JULY 31 – Link
The Art of GableStage through the camera of George Schiavone and the
music composition of Matt Corey, long-term resident photographer and
sound designer at GableStage.

MY BLACK BODY IS
BY KUNYA ROWLEY
PREMIERES AUGUST 7 – Link
How does it feel to inhabit a body that is revered, detested, over-sexualized, ridiculed, fetishized, profaned, killed?
Black art song and negro spirituals will provide the foundation to create this performance of
celebration & reclamation of blackness that is part concert, part spoken word, and wholly theatrical.

INTIMATE/INTERNET
BY BRANDON URRUTIA & MICHAEL YAWNEY
PREMIERES AUGUST 14 – Link
Intimate/Internet follows the journey of a young man trying to find connection
in a galaxy that has shrunk to the dimensions of his parents’ home during lockdown.
Is it possible to find love when the only good wifi is in the kitchen and your mother is two feet away?

A FLORIDA STORY
BY CALEB SCOTT & JESSICA FARR
PREMIERES AUGUST 21 – Link
A Florida Story aims to tell the stories of the voiceless people whose anonymous faces constantly pop up in mug-shots
and headlines all across Florida – the misunderstood and the misrepresented, celebrating the secret trials and unspoken
desires of the underdog, the outlier, and the renegade in the spirit of the world it is inspired by.

PRETTY BOY JOSH
BY JOSHUA HERNANDEZ
PREMIERES AUGUST 28 – Link
Pretty Boy Josh is a performance art piece that explores the stigma of homosexuality in the Miami Latinx community,
illustrates the dangers of hyper-masculinity, and voices the possibility of living an optimistic queer life.
Projections, voice overs, acting, archival footage and sound express this story in a series of transitional waves.

REBOOT
BY GREGG WEINER
PREMIERES SEPTEMBER 11 – Link
Reboot is a dark and funny look at one man’s mid-life crisis
in a time when exponential changes make him
question his own sanity.

STARS IN THE BARD
BY COLIN McPHILLAMY
PREMIERES SEPTEMBER 18 – Link
A look at the ties between the Shakespearean canon and the astrology of the late 16th & early 17th centuries.
Somewhere between Nicolas Copernicus and Isaac Newton, astrological knowledge slipped from common usage.
How is it relevant today? And what did it mean to Joe Adler?

1/1000
BY JOSHUA JEAN-BAPTISTE
PREMIERES SEPTEMBER 25
Short sci-fi film and digital theater piece, 1/1000 follows a tech worker whose existential thoughts reach a fever pitch
due to his isolation amidst a pandemic and racial tensions.  When he receives a mysterious device that allows him
to adjust various statistics in his life, this sparks a chaotic shift in his reality, for better and for worse.

For more information on ENGAGE@GableStage, and to learn about the artists and their projects, visit: www.gablestage.org/engagegablestage