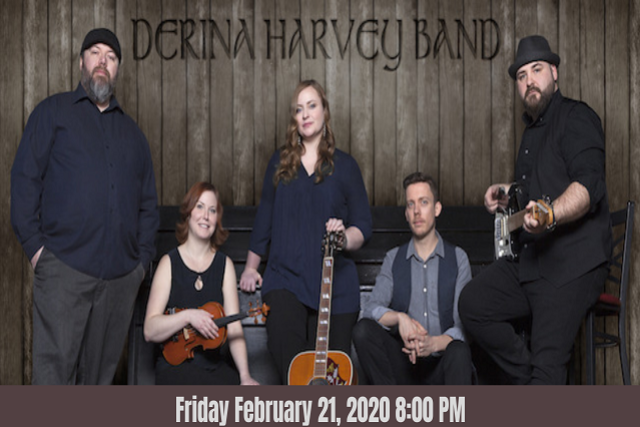 Seminole Theatre
Fearless front-woman Derina Harvey leads this Celtic rock group, who are recent winners of the People’s Choice Award at the 2018 Edmonton Music Awards​. The group offers a fresh take on traditional folk songs as well as an increasing amount of original material. The band has a rocky, rhythmic undertow; layered with guitars, fiddle, and topped by Derina’s powerful voice. dHb has been ​likened to a rockier version of Canada’s Great Big Sea​,​ if fronted by Adele​, and has earned a reputation as a ​high-energy live show​.

The band has already covered a fair amount of Canada via the performing arts and festival circuits (​over 180 performances since starting 2016​), and is now poised to break into the United States, having been ​selected for three juried US showcases ​in the past year. The group’s showcase at the Arts Northwest Conference in Tacoma in 2017 garnered them the “Best Showcase” Award and resulted in numerous bookings in the Northwest. Their recent trips to showcase at the Western Arts Alliance conference in Las Vegas (August, 2018) and Performing Arts Exchange in Orlando (October, 2018) have already garnered interest across the US.

The band has two full length recordings to their credit. Their self-titled debut album (2013) has garnered radio airplay across Canada, and their second album Rove and Go (2016) has become even more widespread, being added at over 30 stations across Canada and tracking at #65 on CKUA's top-played albums for 2016. The band is currently writing original material (latest single "The Fallen Man's Daughter" - release date October 19th, 2018) and will release a full-length album of primarily original material in 2019.

Doors open at 7pm and show starts at 8pm.

Regular priced tickets for all other ages available at http://seminoletheatre.org/event/715-derina-harvey-band