Caravan: A Revolution on the Road Presented by Arsht Center 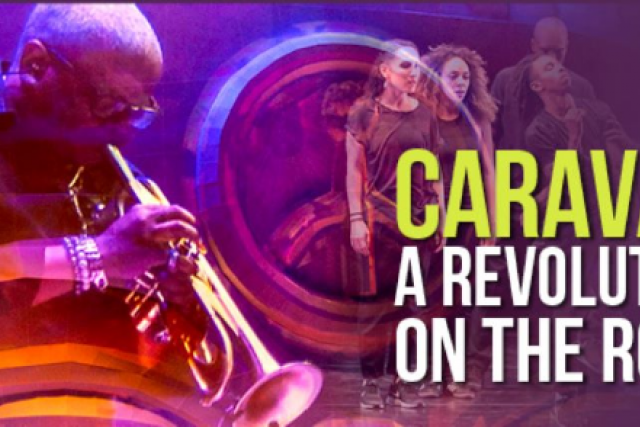 Caravan: A Revolution on the Road Presented by Arsht Center

These artists have created a multi-disciplinary performance that transcends racial and social boundaries and breathes new artistic life into conversations on personal and collective identity in relation to social and political structures. Following the release of Breathless, an elegy for Eric Garner, Blanchard expressed that ‘we’ve been having dialogues for far too long with no actions, no change.’ The forceful, yet inclusive energy of this new project encourages the audience to make yet another step toward positive social change.

Blanchard’s fusion of jazz, R&B, blues, funk and soul will synergistically interweave with Harris’s approach to movement, which represents a kind of archaeology of the human spirit through vernacular African American dance styles. Scott’s conceptually-based visual projections and installations, which are rooted in African and African American art and culture, will seamlessly integrate into the overall artistic narrative. The skeleton of the work will examine these larger societal issues, while the individual nuances of the stories will reflect the life experiences of each artist and their thoughts and feelings about Black Lives in the 21st century.

TERENCE BLANCHARD
Terence Blanchard made a name for himself as a top-tier jazz trumpeter who has gone on to enjoy a multifaceted career in jazz and beyond. He’s not only a five-time Grammy Award winner and Oscar nominee for BlacKkKlansman, he’s one of the most influential jazz musicians and film score masters of his generation—a member of a jazz legacy that has shaped the contours of modern jazz today. He’s been recognized by USA Artists, the MAPFund, and the NEA for his work in the jazz idiom and beyond.

RENNIE HARRIS
Rennie Harris is a dancer, choreographer, artistic director and professor of hip-hop dance. In 1992, he founded Rennie Harris Puremovement, a hip-hop concert dance & theater company are dedicated to preserving and disseminating hip-hop culture to the masses. A recipient of a Guggenheim Fellowship, a United States Artist Fellowship, and a Governors Artist of the Year Award (among others) in the last ten years, Rennie Harris has been named one of the most influential people in the last one hundred years of Philadelphia history and has been compared to twentieth-century legends, Alvin Ailey and Bob Fosse.

ANDREW SCOTT
Andrew Scott is a visual artist living and working in Dallas who specializes in the intersection of digital fabrication technologies and traditional fine arts practices. He is currently an associate Professor of Art and Technology at the University of Texas at Dallas where he teaches courses in digital fabrication.